Experimenting with army size – an assessment.

After completing test game one I was surprised as to how well the Romans controlled the battle. Despite losing three elements and therefore one short of losing the engagement the Romans still retained the initiative. This was done by inflicting enough casualties on the first sub-tribe to send them into demoralisation; thus  building a momentum up as this freed units to join battle against the next sub-tribe.

Once demoralised, a sub-tribe may not initiate any tactical moves but can still inflict damage especially if an opponent decides to engage them; archers can still be effective against mounted. This follows the same rule as per the big battle game.

One die for 18 elements
During the historical matches between the Consular army and the Spanish I played a number of games using 18 elements a side. The use of one die for pip score did not hinder the game as both sides needed more time to develop their plans resulting in games lasting between eight and twelve turns.

The loss of the General
No generals were lost during these tests nor in the past games using such large numbers per command;  this contrast with the frequent loss of the general in the standard 12 element game. Despite the loss of commander I have been fortunate enough to win battles without them.

However, under these conditions (18 elements), losing the general would become an even greater challenge. Firstly, any pip score would need to be parcelled out among the remaining sub-tribes for their tactical moves and let us not forget the demoralised command would require pips to hold their ground.less its departure would leave a gaping hole in the battleline. 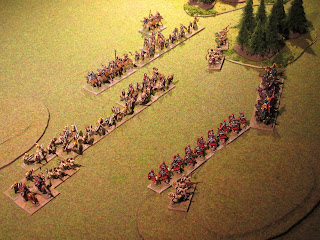 Other period applications
The demoralisation rule and it application to the smaller game has proved useful. For historical scenarios requiring allies to corporate together, this can be an effective tool to re-fight the Roman civil wars. Armies of the medieval period were not always homogeneous but a loose alliance of royal houses brought together for a temporary cause. This application of the demoralisation rule might also prove a useful way to demonstrate 'treachery' as the recalcitrant sub-group leaves the field.

There is still much to experiment with and I will report future results here.