There are a few subtle differences between the Lombard and Italian Ostrogoth for one the foot troops are replaced by spear, archers remain (3Bw) but are less in number and the introduction of psiloi which are useful in difficult terrain. This should be an interesting matchup.

Game 1
The battlefield had a minimal amount of terrain features, but their location influenced the battle plans of both sides. The Byzantine were to splitting their force into two wings; one mobile and the other of infantry.
The Ostrogoth anticipating this deployed a narrow front of two lines, the first comprised all the Italian infantry and the second held all the mounted force. 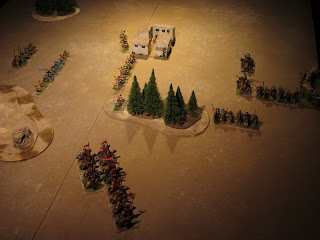 The infantry battle took place first and here the Byzantine placed most of their effort with the skutatoi and psiloi accounting for a 3 – 0 score. 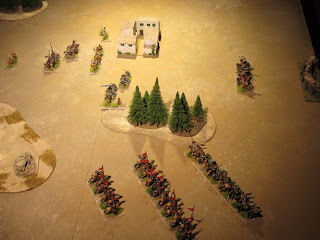 This energised the Ostrogoth nobles into action and they struck the Byzantine cavalry with equal number of units. 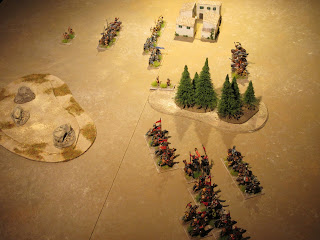 The effort fell short of the mark as two more units of Ostrogoth cavalry succumb to the Byzantine lance.
Score 5 – 0 Early Byzantine.

Game 2
The second engagement found the Ostrogoth deployed in front of two woods. Facing the barbarians the Byzantine formed the infantry on the right and all the mounted on the left. 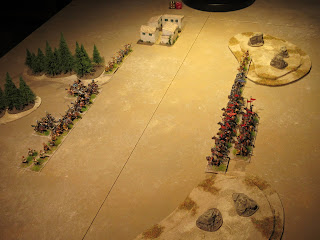 The Ostrogoth moved first and send their skirmishers to quickly occupy the hill flanking the Byzantine left. At that same moment, the Hunnic light horse needled their way between the skirmishers and the Ostrogoth battle line to position themselves in front of their camp. 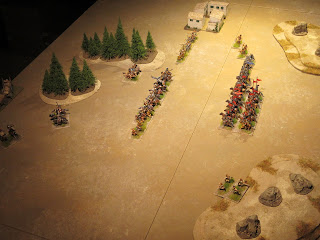 Closing the gap between battle lines the Byzantine was able to form one contiguous front. 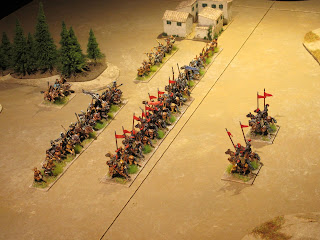 The Ostrogoth cavalry sent a number of Byzantine cavalry back on their heels but the effort caused no casualties. 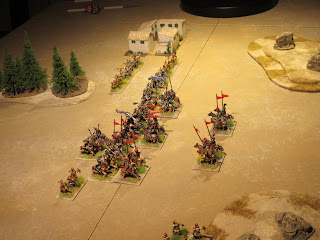 Within two bounds the Byzantine put their reserves into good use destroying two units and third, their general, killed outright by the Strategos. Score 4+g – 2 Early Byzantine.

Game 3
Defending again the Ostrogoth made minor changes to the terrain features and added a river. From the deployment, the Byzantine were now confined to a narrow defile with hill and wood on either side. The Ostrogoth deployed in one line with the infantry formed on the left and all the mounted deployed in centre with all the skirmishers and a unit of archers extending the right. 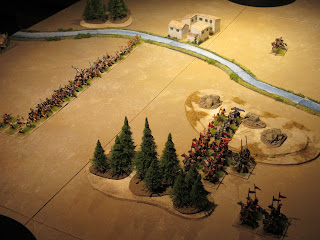 Half of the Ostrogoth cavalry were given the task of confining the Byzantine cavalry to the defile while the infantry were ordered to seize the hill to support the eventual cavalry assault. Coordinating two separate attacks generally falls flat as the unexpected usually happens; the Byzantines attacked. 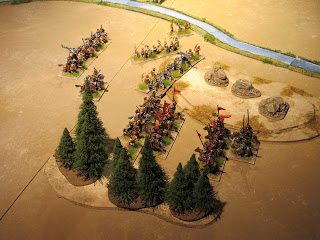 Any plans that either side had were quickly dispensed with as the battle turned into a tavern brawl. 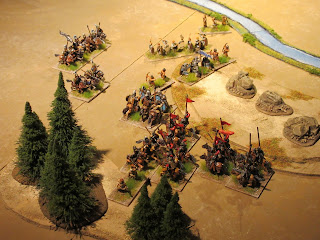 The Byzantine forces beat all opposition in the defile and included the timely arrival of skutatoi beating Ostrogoth knights on a score of even bringing the score 3 – 1 for the Byzantine. 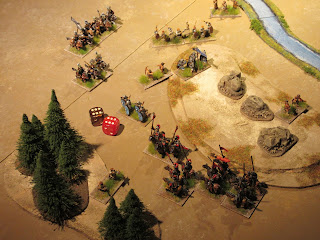 In that brief moment of euphoria, the Ostrogoth counter-attacked sweeping the hill of all opposition and in the defile Ostrogoth cavalry cut down an isolated skutatoi to change the tide of battle. Score 4 – 3 Italian Ostrogoth. 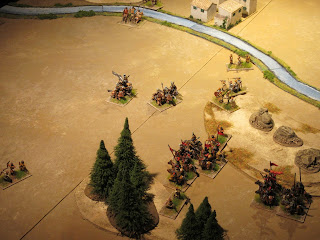