502
More than sixty years had passed since the last major conflict between Persia and Eastern Rome, but the Anastasian War (502 – 506) was to become the first of many. From her major staging point (Nisibis) Persia had seized a number of key fortresses which were eventually re-taken during the long struggle.

504
A brief armistice was made to counter the Hunnic invasion of Armenia. Two years later a negotiated peace treaty was signed and Rome sought to correct the military shortcoming on the frontier by building a major base at Dara to counter Nisibis.

526
The duration of the peace treaty ending the Anastasian War was set for seven years, in reality it lasted for twenty. A question of Persian royal succession and the defection of the Iberian King Gourgen broke the peace. At the opening of the Iberian War, little fighting was done between Byzantine and Persian troops as allies were recruited to serve both sides; Huns fought on both sides in the north and Arabs in the south.

527
Justinian succeeds to the throne and to effectively defend the eastern borders Western Armenia was reorganized as a military zone which included First, Second and Inner Armenia. The former Armenian regiments now became part of the Imperial military thereby eliminating the civil administrative functions held by Greek and Armenian nakharars.

532
The Persian King Khavad dies and is succeeded by his son Khosrow I who concludes a treaty with Justinian. Justinian returned to the reorganization of Western Armenia intent on making it a province within the Empire. No longer sub-divided, Armenia now became one province and the institution of new laws were clearly designed to integrate Western Armenia into Byzantine authority.

537
The reduction of nakharar authority and increased taxes stirred discontent in Western Armenia. Key figures among the Armenian royal houses combined their forces to begin an insurrection. They managed to sweep the Byzantines out of Western Armenia, destroying a number of Imperial regiments. The revolt was crushed by the arrival of a large Byzantine force capturing many Armenian nakharars to be either executed or exiled.

570
In Persian Armenia, similar changes were taking place; heavier taxes and economic and political exemptions for the nakharars were greatly reduced. The Persian Marzban Souren provoked the masses by erecting religious shrines. In response, the Armenian chiefs sought the assistance of Byzantium to liberate Eastern Armenia if they rose in revolt.

571
At the outbreak of the rebellion, the Marzban Souren was slain sending other Persian officials and soldiers to flee. Resistance continued for two years against Persian forces without Byzantine aid forcing key Armenian to Constantinople to renew their plea.

572
With the Huns renewing their activity on Persia’s eastern frontier, Byzantium declared war against Persia.
After seven years, the Byzantine were less than successful forcing them to seek peace with Ormuzd IV. The terms of the treaty did not satisfy Ormuzd IV, so hostilities were renewed.

582
Byzantine fortunes turned for the better with the new emperor Maurice. Invading Persia, the war was brought to a successful conclusion and supporting the claim of Khosrov II restored him to the throne in 591.

591
In return for Byzantine aid, the new Persian King gave a major part of Armenia extending its eastern border from Lake Van to Nissibin. As part of the agreement Armenian soldiers would be relocated to other parts of their respective empires in an attempt to diffuse any future friction.

602
Maurice is assassinated by the usurper Phocas, which gave the Persians an opportunity to denounce the treaty of 591 and reclaim lost territories. Persia successfully occupied Syria and Egypt but Byzantine fortunes returned when Heraclius seized the throne in 610.

622
Heraclius’ first attempt to regain a foothold in Armenia was less than successful, but a second campaign two years later swept the Persian army from the Armenian highlands to the Tigris winning a decisive victory. The reverses in the field generated disorder among the Persian elite prompting the assignation of Khosrov II. His son, Kavad concluded a new treaty and with it a greater part of Armenia passed into the Byzantine Empire in 627. 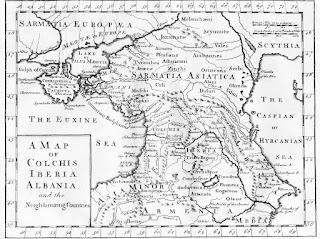