Historical match up – Early Byzantine vs. the Gepid.

Match number five takes place in the Gepid homeland of the steppes. The Gepid field equal number of knights, warband and skirmish archers so will pose an interesting opponent for the Byzantine. Unfortunately, the speed with which each game moved few photos were made.

Game 1
Two gentle hills and rough ground were the only salient features of the battlefield. The Gepid deployed and infantry centre with skirmishers evenly distributed on both its flanks. All the Gepid noble cavalry formed up one the left flank. 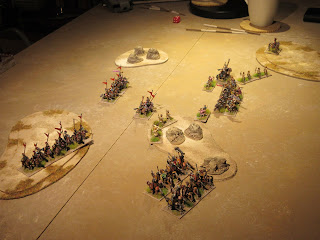 The photo shows the Byzantine bound of turn three. The legions supported by bucellarii have engaged the Gepid warband. In two turns, the main strength of Gepid infantry was destroyed closing the game with a score of 4 – 0, Early Byzantine.

Game 2
This time the Gepid deployed its main strength in two lines, the noble cavalry supported by Gepid warriors. The Byzantine Strategos placed the legion and its support on the right and would move ahead supported by the main body of cavalry. On the left wing, two bucellarii and Hunnic LH would flank the Gepid force and attack their supporting line. 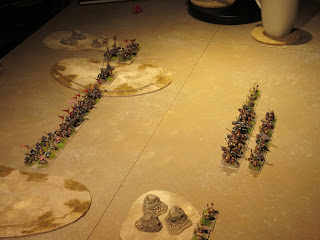 The near destruction of the Gepid reserve line (3 x 4Wb) had the desired effect of stinging the Gepid noble cavalry into action. Despite some loss, the Gepid force capitulated, score 4 – 2, Early Byzantine. 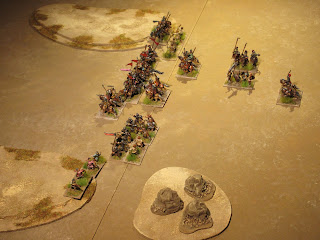 Game 3
The final game, the Byzantine Strategos switched commands giving the other regiments an opportunity to test their ‘metal’. The made a concerted effort to breach the Byzantine line and this they did by eliminating half the skoutatoi. On the Byzantine bound and with a poor pip score of 'one', the skoutatoi destroyed a second unit of Gepid cavalry. 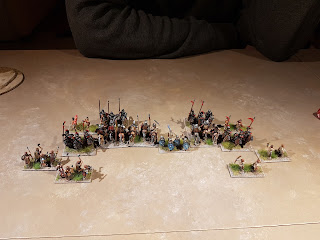 This photo shows turn four and the completion of the Gepid bound and brought the score to an even 2 – 2. 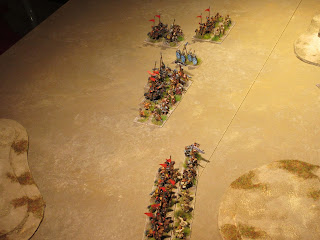 The legionnaires, fresh from their victory over Gepid cavalry now moved on the exposed flank of the Gepid command. Together with the Herul symmachoi, they brought a close to a well fought battle. Score 4g - 2, Early Byzantine.
Posted by Timurilank at 00:58