Migration to Kingdom – assessing the game.

Designing a campaign game around a migration might not seem to fit everyone’s idea of an ancient theme, but these events did happen. I looked at alternative conflicts set at the beginning of the 5th century and there were enough possibilities; Stilicho, Alaric, and Radagaisus to name a few. However, further reading of the migration did have its share of conflict situations; aside from the pillage and plunder by marauding bands of barbarians, inter-tribal discord and ad-hoc resistance measures in the provinces there were the revolts by the Gallo-Roman aristocracy against the ruling authority.

The challenge now was how best to present these in a form that would not detract from a player’s appetite for battle.

The first scenario, 407 AD, revealed the shortcomings of the requirement to move an army. The Roman player need only move one army while the barbarian player had his hands full with three. Gaining no activity points by the barbarian player forced the migration to stay in place and became less of a danger. Not quite what I had in mind.

By the last scenario, 409 AD, the barbarians could exchange their army for marauding columns which could move at no cost to an adjacent province. This meant the civilian component of the horde required an activity point to move and this compromise worked. 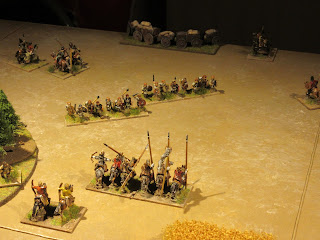 Limiting the amount of plunder that could be culled from a province in any given month meant two marauding columns in the same province would need to fight one another to claim it or one column would be returning with spoils only to be caught while on the march. Either way this generated a number of small actions.

So long Constantine III won battles no one dare challenge his authority. By the second year the barbarians were still in Gallia which had his image of "saviour begin to lose its lustre. In scenario 409 AD a number of revolts were planned but as the cards were played, all three occurred in the same month and in different parts of Gallia and Hispania. This really livened the game.


Partially, as not all the barbarians would make the crossing into Hispania by the end of the game, but the majority would do so before spring 410 AD, and Constantine III kept his head for another year.
Posted by Timurilank at 01:35