Determining the battlefield, using DBA 3.0, the defender selects from his home terrain and places compulsory and optional features on the game board by casting a die for the quadrant in which they are to be positioned in. When completed, the attacker selects a side for his deployment area and the defender takes the opposite side for his. Reading military history one may encounter battles fought over terrain which might not quite fit the options listed as home terrain for an army and our campaign system does take this into consideration. One example from the campaign examples given here had the Bosporan army fight the Alan in a series of battles over steppe, littoral and arable terrain with the defender selecting features from the terrain type given.

The stratagem “choosing the battlefield” will offer the attacker the choice of which terrain items are to be placed by the defender. This option will help cavalry armies avoid battle where terrain features are of maximum size or bad going and conversely, an infantry army fighting a highly mobile one would prefer fighting over restricting ground.

The option cost 2 points to purchase and the stratagem counter is presented to the defender before the placement of terrain. The attacking player selects the terrain pieces to be placed which must fulfill the rough/bad going requirement and feature size.


Over the past year, much of my terrain has been refurbished and new features have been added to increase the size options of difficult hills, wood, etc.  Some features have also taken a modular form, such as the hamlet (BUA) or plough which can be used in its minimum to maximum size; the photos here illustrate the modular system described. 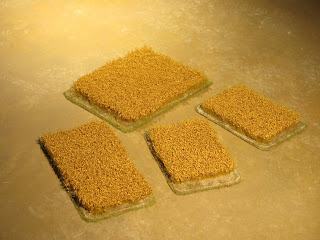 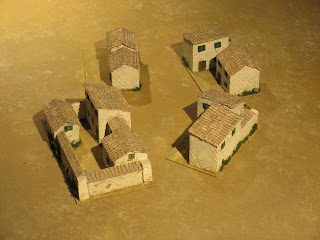 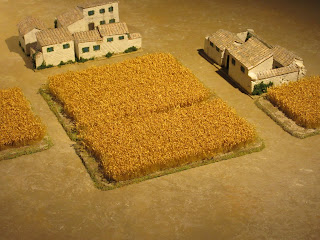