From Migration to Kingdom – part three

Administration
To understand how well the military were able to operate we need to look at the administrative side of picture. Diocletian reforms reached not only the military but also changed the structure of the provinces. The large number of provinces were consolidated into 12 dioceses, each were sub divided each into 4 prefectures. The immediate consequence was two fold; it decreased the number of military units per prefecture, thereby reducing the potential of rebellion by governors but it did add another layer of government further isolating the provincial areas further from central government.

At first glance, the governing of the empire appears top-heavy until we understand the tasks assigned to the smaller regions, such as the census, land assessment and taxation. Within the new structure a census could be conducted with more frequency producing a far more accurate picture. Conducted every five years and noted the number of citizens, non-citizens and serfs, a newly instituted class of “obligatory tenants”.

In addition to frequent census, the new system conducted the evaluation of the land within the empire. Territories were surveyed and acreage tallied per proprietorship. The results could then be assessed based on what it could produce, such as vineyards, orchards, grain fields, pasture lands or mines (Bury).

Unfortunately, with the improvements to the system for taxation purposes (according to Bury) we do not have records to the amounts gathered nor how it was spent. This is understandable given that the political climate was in a state of flux as throughout the later part of the 4th century armies were in constant motion repelling barbarian invasions or suppressing rebellion. To defend against this, the provincial governors relocated border troops to garrison their cities or to guard the imperial armouries or factories.Throughout the turmoil of the period, key cities were sacked destroying not only property but valuable records as well.

Throughout the period Rome was partially solved the problem of a weakened frontier by locating Germanic foederati in areas such as the lower Rhine (Salian Franks) and later near modern day Mainz (Ripuarian Franks). Roman citizens in these areas either found themselves sharing their lands with the barbarians or relocating adding a ripple effect to the migration picture. The downside of establishing these “buffer” areas meant Rome would see even less revenue to sustain herself. As Rome's influence in these regions declined we find former Germanic migrants assuming the mantel of power, such as the Franks establishing a recognized kingdom in 357 AD. 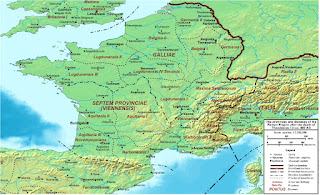