The Seleucid – the mounted elements.

Any reader contemplating collecting the Seleucid I would recommend having B. Bar-Kochva – The Seleucid Army – organization and tactics in the great campaigns in your library. The author gives an in depth analysis of the regular army from its changes during the early Successor period to the empire’s collapse.

My Seleucid collection will represent the armies that came into contact with Rome to the final campaign against the Maccabees and will cover both DBA lists II/19c and d. The only difference between the two lists are the introduction of imitation legionnaires (4Bd) and the addition of LH/Cv, the latter presumably to counter the Parthian threat. Other than the minor changes, the regular army still comprises of cataphract, phalanx, elephants and scythed chariot, thureophoroi or thorakites, archers and slingers. 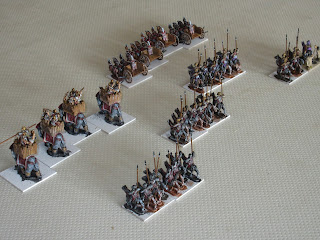 Painting.
The cavalry like the infantry are divided into three groups representing the Royal Guard, the Guard and the troops of the line (katoikoi).

The colour schemes for both the elephant and chariot are a standard pattern as these would more than likely be grouped together for larger battles.

Last step is the texturing of the base and adding some grass. 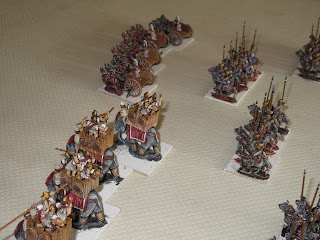 Cheers,
Posted by Timurilank at 08:27