This series of test games conclude the Spanish list and of the three I  would think the Celtiberian are the toughest to fight. Home terrain for the Celtiberian is hilly, so we might see similar terrain as was fought over by Lusitania but with more green. Combat factor for the Scutarii are even with Roman blade and easily negotiate the rough terrain of Celtiberia, but if anything can be noted as a disadvantage Celtiberian scutarii would recoil on an even combat score.

Historically, Rome fought two major wars against them and fortunately for DBA Roman players, the Celtiberian can also be also allies.

Test game one
As Celtiberia defend, they select three difficult hills, a wood and river as terrain pieces. The placement created a valley with a river meandering between hills. Rome selected a side that would have the river on its right flank as it approach the Celtiberian battle line. The photo show the positions after turn one. 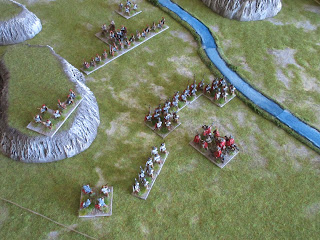 The following turn Rome took the initiative combat and for its effort recoiled all along the front. On the left a Roman velites fell to a downhill attack from Caetrati. 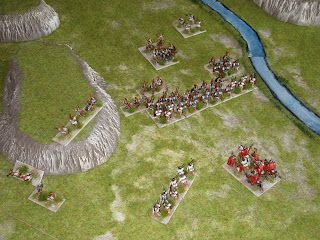 In two turns the battle lost all semblance of order, isolated elements were fallen on by two or more enemy and some carried on with their own private battle pursuing a recoiling enemy further behind the lines. Celtiberia seized the initiative to send Caetrati to flank the Roman right and discovered the river posed no obstacle. 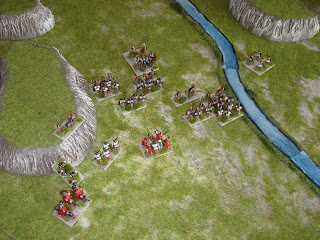 It was a close battle, but Roman determination won over Celtiberian impetuousness; final score 4 – 3 for Rome. 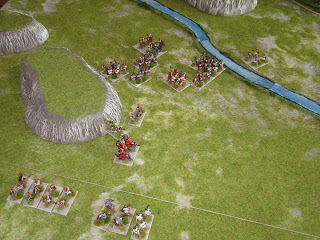 Test game two
Celtiberia kept the same selection of terrain and the die cast resulted in another arrangement; no constricting valley which offered both sides an opportunity to deploy in extended line. 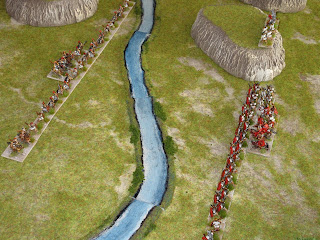 Recalling their successful river crossing experience against the Lusitanian, Rome would move across as one line to attack and not piecemeal; this took an extra two turns to accomplish. 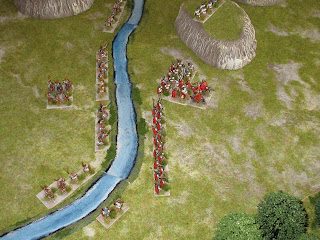 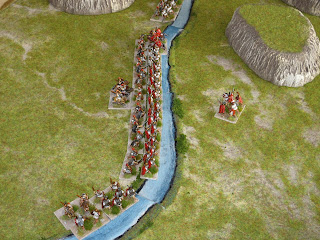 The river was not an obstacle as was anticipated so the Celtiberian received no advantage for defending its bank. The fighting in the center rolled back and forth, but Rome began rolling up the Celtiberian right. Score at the moment was even 2 – 2. 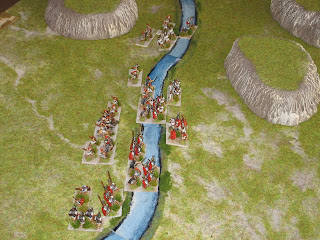