The series of test matches moves from Africa and Spain to battlefields closer to Rome, Gaul. Both sides have arable as home terrain so we should see fields, enclosures, low hills, wood and perhaps a river.

Looking at the Gallic list, the five mounted elements will pose a different problem as blade fight mounted at a lower factor than against foot.

Test game one
Terrain selected from the arable list were two plough, one wood, two gentle hills and Rome chose to attack from the side with gentle hills. The Gallic horde moving at maximum speed (3BW) would crash into the Roman line on the second turn; Gallic cavalry were sent to flank the Roman right. 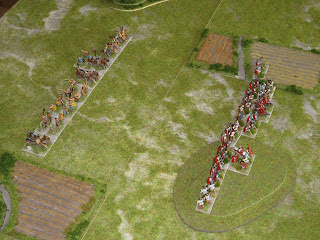 The Gallic warband wheeled to the left to avoid the hill position and Rome responded by adjusting her formation; reserves were held back to deal with the Gallic cavalry. 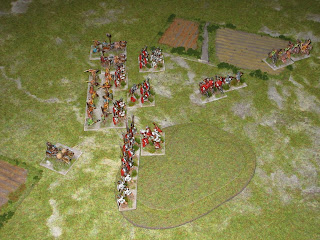 The maneuver left Rome with four elements facing a single chariot unit. During subsequent turns the Gallic attempt to flank the Roman side failed at the cost of two Cv, however, the Gallic warband ground the Roman centre to dust. Final score 3 – 4 for Gaul. 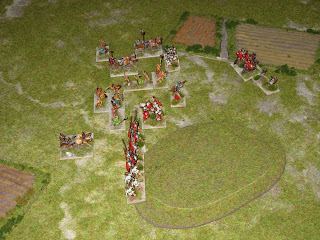 Tomorrow, the concluding two matches.
Posted by Timurilank at 00:49