The Bosporan Kingdom at the time of my Severan Dynasty Project (2nd/3rd c. AD) covered the Crimea and the Taman peninsula to include the marsh areas and the mouth of the Don River. It was for a brief period a part of the Roman Empire until Galba restored the kingdom to Rhescurporis I in 68 AD. For the next three centuries the royal houses of Bosporan were able to retain an autonomous rule over their domain.

Bosporan economic activity centred around the export of grain, gold and slaves. Keeping their commercial interests alive around the Black Sea was not without a continuing struggle to keep it free from attack as the kingdom was in a perpetual war with various Scythian and Sarmatian tribes.

To maintain a Roman presence in the region was the task of the fleet. However, during the 1st c. AD there is documentation of Roman garrisons in the region, but these disappeared when Galba restored autonomous rule. By the following century we do find renewed military activity at the end of the 2nd century with the presence of vexillations Legio I Italica and XI Claudia. Their presence took the form of engineering works and road construction.

The DBA list.
The Bosporan army list (II/25) covers our period from 10 BC to its demise by the Huns in 375 AD. In Armies and Enemies of Rome by P. Barker, Bosporan units would likely have appeared similar to Roman units of the period.

Of the items listed above, the lancers and horse archers were the only figures that needed ordering. Foot figures are done but need some details painted. The bolt shooter needs to be constructed to fit a mule cart and hopefully after a week of receiving the cavalry, this army will be ready to do battle against the Alani, Sarmatae and Gothic pirates.

Clothing colours according to Phil Barker’s book are bright for the mounted units, not unlike the Gauls or Germans which leaves the foot units wearing most likely bleached or un-bleached linen. The figures used for my Bosporan are all Old Glory for which the mounted are Sarmatian knights with an equal number of Scythian horse archers. The spearmen are listed by OG as Greek Colonist and archers are extra Palmyran and Sassan figures. The link illustrates possible clothing colour.

Sarmatiansin a painted tomb of the Crimean Bosporus Crypt 1872

In the illustration is a standard bearer of the period (2nd c. BC) and as my Bosporan are of the later 3rd century AD they will carry Draco standards. The command element will have a labarum standard with a religious motif.  In the book, The Supreme Gods of the Bosporan Kingdom, Yulia Ustinova describes the older gods and goddesses were still revered as late as the 4th century AD which offers some interesting options for a banner.

The Northern Black Sea Shores of the Pontic Kingdom 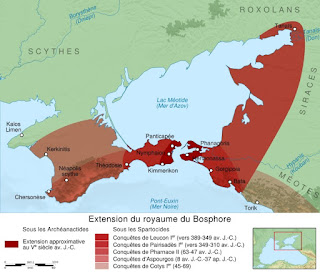