I am reading at TMP (The Miniatures Page) and Fanaticus more new players are expressing their interest using the DBA 3.0 big battle option with a preference for historical match ups. That is good news. Our historical match ups have centred on the major armies of the 3rd century AD; Rome vs. Early Germans, Parthia vs. Sassan and either one of these vs. Rome and with plenty of minor armies to add as an Ally which do provide a mix of troop types adding spice to a game.

Recalling my earlier experiences with 2.2 and the big battle option I have found my style of game has changed with DBA 3.0 and this is principally what I wish to share here. These points are not earth shattering, but players with some big battle experience will recognize familiar trodden paths.

The Deployment.
I found with DBA 2.2 my games were characterised by maintaining an unbroken battle line of three commands. To ensure any holes were quickly filled, reserves, were usually positioned directly behind and in contact with the main battle line which meant they were essentially committed to that particular section of the line. The entire army would do its best to move forward while cavalry would protect its flanks from enemy encirclement.

DBA 3.0 with its increased move distances I can now position my reserve formations further back knowing they can be quickly employed when needed; in the case of mounted troops this can be 4BW or more or half that for reserve formations of infantry. I also find leaving space between commands an advantage (2 to 4BW) as formations can quickly be extended with the use of reserve units. This evolved to an interesting ploy as the smaller front worked as a lure for an opponent believing an advantage could be quickly gained against small numbers.

Redefining the deployment area and permitting certain troop types to form up on the flanks has helped move our game along historical lines and this prompted a quick brushing up on such classic writings as Vegetius and Frontinius. Further changes to the rules or clarifications have help improve the speed of play and two such stand out in my opinion; the conditions needed to flank an element and threat zones; these will be covered in detail below.

The Length of Game.
With the older version we found the limitation of time influenced how we deployed. As our games averaged 2 hours or more the pressures was on to finish a game within the allowable time and reach a decision. This resulted in tactical moves that were more desperate charges than tactical genius. Under 3.0 these same games now average slightly over an hour, which not only opens an opportunity for a second game, but more importantly, we are now beginning to exercise more thought and cunning. 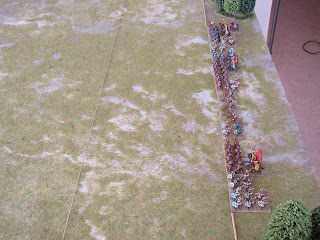 Photo
The Middle Imperial Roman army deploy within 600 paces of its base edge. Artillery were a requirement under the 2.2 army list for the western army and the presence of archers (4Bw) made this a predominately infantry strong army. Next post deals with the positioning of troops.