The Patrician Roman armies for the East have as their principle enemy Sassan and the various Gothic tribes that swarmed across the Danube to ravage the Balkans. Within the army list given below are a number of troop types painted (Bold print) and will be added to the current Later Imperial Roman collection.

These dozen elements are for the most part barbarian Feoderati German warband and Gothic knights with a sprinkling of Roman horse archers. In a brief email exchange with Simon McDowell, author of "Comitatus" we discussed the various options available to make Feoderati distinguishable from the barbarian cousins on the other side of the battlefield.

I liked the option to have my Feoderati retain their shields by give them Roman style tunics. I added the Draco standards to give them a uniform look with Roman units carrying theirs.

Currently my two 3.0 Patrician Roman armies consist of the following and include the options: 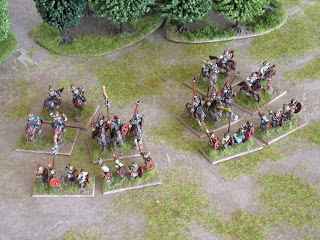 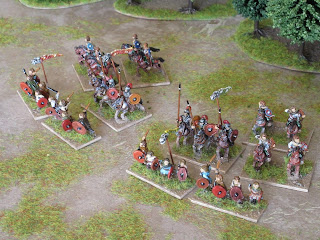 After completing these new additions, I began work on a Hunnic force, not the one lead by Attila, but the d-list which are predominately LH with a Cv General. These made their appearance in the East and under King Grumbates served with the Sassan armies of the 4th century. These will appear in my next post.