Continuing with medieval background articles, I saved the topic of disease toward the end as I had not a clue how this should be integrated in a campaign setting. Die rolls, event cards, catastrophe tables were possibilities, but as I gleaned information the answer became clear. Let us first look at the scope of disease in this period.

The Black Death
The most notable affliction, the Black Death was the most devastating; some suggesting between 75 million and 200 million people became victims in the period of 1348 and 1350.

Although the event was a half century before the start of our campaign, the plague repeatedly returned to haunt Europe and the Mediterranean throughout the 14th to 17th centuries.

In 1466, perhaps 40,000 people died of plague in Paris. During the 16th and 17th centuries, plague visited Paris for almost one year out of three. From 1348, the Black Death ravaged Europe for three years before it continued on into Russia, where the disease hit somewhere once every five or six years from 1350 to 1490.

Its periodic occurrence was due to rapid urbanization of cities which became a breeding ground among the filth, decay for all sorts of vermin and parasites. 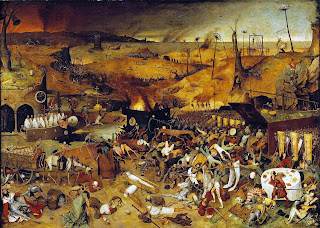 Mental illness
Mental illness was also widespread during the middle Ages. Injuries received to babies during the birthing process often led to brain trauma. Little could be done for these people, but there were no institutions for them and many were accepted into society. Others, however, would have crosses shaved into the backs of their heads, or be tied to pews in the church in hopes that mass would bring them relief.

Leprosy
Leprosy remained the most feared disease of the middle Ages, until the Black Death, that is. This disease was rampant throughout Western Europe and leper colonies could be found everywhere. In France, alone, there were 2,000 such colonies in the 11th-13th centuries

Life expectancy
Medieval men and women reaching the age of 45 were considered "old", however, the average life-span was somewhere between 30 and 35 years. This number is said to have dropped all the way down to eighteen and twenty years after the introduction of the plague in 1348. Variation of age was subject to factors like poverty, wealth, city dweller or rural inhabitant.

Causes:
While the ancient diseases of pneumonia, tuberculosis, and smallpox, and others including typhoid, diphtheria, cholera, malaria, typhus, anthrax, scarlet fever, measles, epilepsy, trachoma, gonorrhea, and amebiasis persisted throughout this period, many of which were related to deficient diet.

Life in the medieval period became a vicious circle in which hunger and chronic disease reduced the productivity of the peasantry, freemen and others alike. In an agrarian and mercantile society, this had dire consequences.

Further recommended reading:
Black Death
Diseases during the Medieval Ages
Leprosy and Disease in the Medieval Age
Medieval Diseases
Disease as a factor in the campaign
We generally avoid using event cards or tables to determine a moment of decision. Depending on the frequency of moves, when do you roll the die or draw a card to represent an event? The DBA campaign option is based on seasonal moves (double). We prefer monthly, which is fine for recording anomalies within the expected cycle of the year. An early thaw with a steady warm period and sufficient rain can generate an increase in harvest, whereas a prolonged winter can produce the obverse, a meager harvest.

Aside from the economic consequences, a second such year would lay the basis for a possible famine. As we have read above, after famine, disease followed. 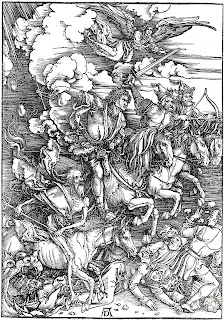 For the campaign designer, the game gathers a realistic luster if changes become logical and force the player to make hard decisions he/she would normally not make with a one off game. Crippled by famine and the economics thereof, a player may seek a loan with an exorbitant interest rate, consent to an alliance or if at war, sue for peace.

In the period following the Black Death, we noted similar events took place every five years, but on a smaller scale. The plague would make its presence felt after a year or two of famine.

Note: Pneumonia would strike hardest during the winter months and contagions or plague during the summer period.

Next posting, the cures or Medicine.
Cheers,
Posted by Timurilank at 12:51