While researching medieval towns and cities of the 15th I was surprised at the number of inhabitants per city stood at 2,000 to 5,000.  Only four cities reach 100,000 in population, but the average was about several thousand. I had overlooked the ravages of the Black Death which struck Western Europe in 1347/48 wiping out 30 – 60% of the population.
As a result, the start of the 15th century the landscape would be dotted with abandoned villages and hamlets as the survivors fled to “safer” havens and for many a new identity.
Within the Empire, of the approximate 4,000 settlements, 90% could boast 1,000 inhabitants.

Cities and Free City
I decided Storm Within the Empire would begin with the Duchy of Bavaria and from Map 1 (see previous posting) you will notice the area encompasses a larger area than the standard capital and two cities. The four duchies each have a political center (city), a number of towns and a high proportion of hamlets. For our purpose, cities would be walled, towns would have rudimentary protection of a nearby castle, hamlets, a fortified manor and a village, perhaps a tower to signal an alarm.

Historically, there are a number of “Free Cities” whose sole allegiance is to the Emperor. At this time they numbered 86 within the Empire . Protected by a city wall their defense rested with their own militia and men at arms. Being a Free City meant they could dictate their own peace or declare war when their councils thought necessary. They will have an interesting role to play in this campaign. 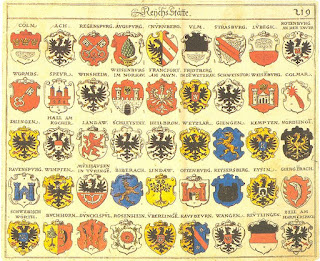 Towns and Villages
Lacking the benefits of a city charter and the means to collect taxes, towns generally lacked defensive protection, whether walls or garrison. Their existence was to serve as trade centers or markets for goods, cattle, grains, metal, etc. Historically, towns and villages grew outside the walls of a local castle.

Function in the Campaign
The current DBA Campaign system recognizes no distinction in defensive positions; capital and cities have the same quality for an army defending it. At time of writing, we have expanded the section “Standing Siege” to recognize four distinct levels of fortification, the city, the castle, fortified manor and tower, each having certain qualities to aid a defending force.

Rather than annotate the map with details regarding the various level of fortification aside from the capital (city) and Free Cities, all other named locations are towns. Habitations smaller than towns are randomly added to add interest to battles and are selected as per scenario. 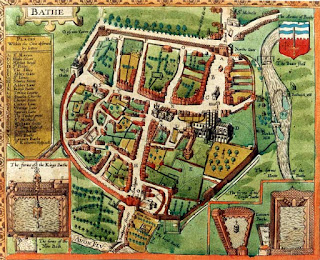 Loss of Towns
The loss of a town not only will impair a source of supply for mobilized armies, but disrupt the flow of commerce and eventually squeeze the source of revenue for the Kingdom or Duchy. This will be covered in the campaign section.

Cheers,
Posted by Timurilank at 12:03