Allies for the Hungarians

The photo shows an interim stage of painting. I lack the highlighting on all the figures as well as belting and harnesses for mounted.  My Hungarians are planned to have three commands totaling 36 elements of which one command will represent allies. According to the DBA army lists, these can also be Wallachian.


I use Legio Heroica for both allies and the Hungarians were taken from the Ottoman, Burgundian and Swiss listings. The appearance for the allies will need some modification and this can be easily remedied with Green Stuff. Fur caps and feathers should give them the necessary look, however, I will not claim that these are 100% Wallachian. There were a myriad of groupings living within the territories South of the Hungarian plains. 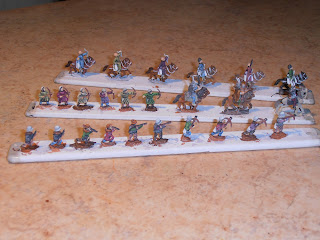 These have a rustic look using earth tones and some blue. I will complete painting these tomorrow afternoon, but will make Green Stuff additions when the Hungarians are finished. All the Hungarian foot have been cleaned and undercoated.


My good DBA comrade Jiri from Switzerland has supplied me with some excellent information covering the Hungarians of this century. Thanks again.