You might describe this purchase as a “controlled impulse”; something planned for the long winter days but brought forward as a result of unforeseen circumstances. I had ordered more SYW French infantry from Old Glory early May, but after three weeks my paint brushes were itching to work again.


While near completion with three DBA armies, I had been online looking for suitable figures for a late Medieval army. Old Glory had the right figures for the infantry, but the mounted figures were not in correct armour. Searching further, I found Legio-Heroica and I knew these were to be my next army. One problem, I had to act fast as they were planning to move and by early June would not be able to ship figures. I also knew, most of Italy is on vacation during the month of August, so the long range plans suddenly became high priority. As an extra incentive, Giuseppe was offering 20% discount for orders placed prior to the move.


I usually do not purchase one DBA sized army when the postage will cover the weight of three, so I ordered enough Burgundian and Swiss for a big battle sized army. With a bank transfer the registered  package arrived five days later. 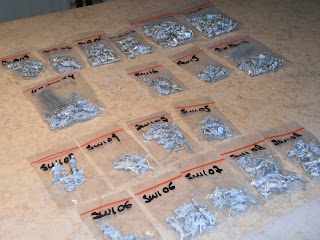 The quality is first rate. Detail I would normally expect on a 28mm figure could be seen on these 15s. The online catalogue photos do not do these figure justice. Plenty of character, poses are natural and the figures are near an 18mm height, while they do mix with OG or similar sized figures, I would not mix them on the same base as these are beautiful figures. One minor quibble, all weapons are separate; bills, crossbow, pike and lance, even the improvised weapons for the peasants are seperate.


The last photo shows a mix of foot and mounted crossbow with a command element at their first stage of painting. Here, you can clearly see the variety of helmets and weapons for the figures. I should be finished with these by the weekend. 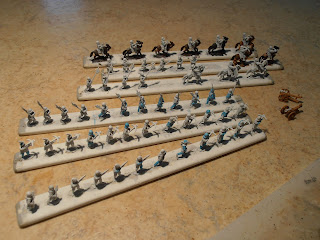 Did I mention that I was pleased with the purchase? So much so, I took advantage of Giuseppe’s latest offer as posted at TMP: LegioHeroica is Moving. I made nearly a duplicate order so I would have two matched big battle armies for the Late Medieval period.

This one arrived in three days. Enough keyboard work and now back to the paint brushes.