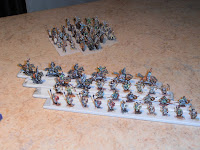 These are the Wends or DBA list III-1a.
Some cavalry and plenty of auxilia supported by bow and psiloi. I painted tese with less bright colours and used natural colours as these would blend in better among the coastal marshlands of Pomerania or the forest areas about Northern Germany.

These are 15mm Essex and were a pleasure to paint, for highlighting, I used a wet brush technique which worked well with the Magyars. I no longer use Silver or Gold paint but prefer to grey and brown and highlight to achieve that effect. Varnishing the figures will further enhance the metallic items.

Next, I need to base these as I have done with the Magyars in the background. One more army pack to paint up, then back to rebasing 15mm Napoleonic French and Russian. 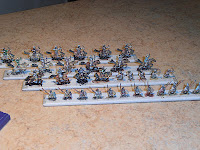 This past Sunday I started work on two DBA army packs which I purchased a few months ago. I was rather surprised how quickly the Magyars painted up. It must have been all the practice with the Carolingian Franks.

This two packs were purchased to provide opponents for the Eastern Franks. The plan was to use the Carolingian figures to represent the intial Eastern Franks of the split empire. As all four Carolingian armies have been sold, I may be offering these for sale shortly.

First, the basing must be done, the flocking and to finish the army, it will need a suitable standard. I have seen some depiction of Ravens on a rectangular standard, but I shall search further for other options. They did fight the Byzantines and Franks, so perhaps I can draw some similarity shape or pattern.

I should have photos of the Wends tomorrow.

Cheers,
Posted by Timurilank at 09:14